My memories
Pregnancy problems ... Blocked nose
Posted on 6th July 2015
Blocked nose
Many women find their nose becomes blocked up and runny, and sometimes bleeds for no obvious reason. This is probably because of pregnancy hormones, which cause the delicate lining of the nose to soften and swell. It can start in the first few months, and last until your baby is born.
If you're expecting a baby, you may be dealing with a stuffy nose that doesn’t seem to go away. This hassle is called pregnancy rhinitis. The cause of this condition isn’t really clear. However, it may be caused by hormonal changes.Having a history of allergies or asthma does not raise your risk of getting pregnancy rhinitis.
Pregnancy rhinitis is an inflammation of the mucous membranes lining the nose. This causes nasal congestion. Increased blood flow to the nasal passages and enlargement of the nasal veins also play a role.
Symptoms occur during pregnancy. They can last for several weeks. On top of feeling uncomfortable, your sleep may be disrupted. This is because the congestion gets worse when you lie down. This may make you to feel more tired during the day. Long-lasting congestion also can lead to complications. These can include sinusitis and ear infections.
If your nose does become blocked, try not to blow it too hard, as this can cause nosebleeds. Many over the counter cold medicines are not suitable to use during pregnancy but some nasal spray products may be useful (check with your pharmacist to see which are best during pregnancy). Saline drops or sprays which do not have any other chemicals in them are usually fine. Steam inhalations may help.
Avoid oily, spicy and heavy food which will consume more oxygen for digestion.
My advise
1... Many women use non-prescription, over-the-counter (OTC) decongestant sprays to open up their nasal passages. Know that these medicines don’t work for pregnancy rhinitis. These medicines may give you temporary relief. However, they may actually make your symptoms worse and lead to a complete nasal blockage.
How can you get relief from pregnancy rhinitis? Experts say you can breathe easy with these measures:
a...   Don’t use OTC nasal decongestants.
b..    Drink plenty of fluids. or water
c...   Increase the humidity levels in your home. Use a humidifier.
d...   Don’t use nasal irritants, such as cigarette smoke.
e...   Get moving. Regular, moderate-intensity exercise can reduce congestion.
2...   Symptoms of pregnancy rhinitis are similar to those of allergic rhinitis (‘hay fever’) and include a runny, itchy or congested nose, sneezing and watery eyes. While it might feel like you are getting a cold, pregnancy rhinitis is not associated with bacterial or viral infection and is therefore not contagious.
3....  While pregnancy rhinitis can occur at any time during pregnancy, it is most common during the first trimester. Symptoms may last for at least 6 weeks, but the good news is they usually disappear within 2 weeks after your baby's birth.
4...    Impact on unborn child:::Many women with pregnancy rhinitis deliver healthy babies. However, any condition that reduces a  pregnant mother's sleep has the potential to impact on her baby. Symptoms of pregnancy rhinitis are especially felt at night, making it difficult to fall asleep, causing women to wake up frequently through the night and be sleepy during the day. Breathing through the mouth due to a blocked nose may increase the likelihood of airway infections.
5...    When you’re pregnant, your sleep isn’t as deep and refreshing as usual, and you’ll wake more often throughout the night. You need more than usual – as much as you can get.
But getting more sleep isn’t always easy, especially if you have work, other children or other responsibilities.
If you can, get to bed earlier than usual and have a daytime nap. It can also help to:  a...rest as much as you can during the day    b.... go for a walk in the late afternoon or early evening     c....avoid tea and coffee before bedtime       d....relax before bed by taking a bath, reading, listening to soft  music which will give peace of mind.
5...    There are insufficient studies to fully understand the impact of these on the growth and development of unborn babies. If you are concerned about your sleep or breathing during pregnancy, speak to your doctor to find the best way to clear your breathing passages and get proper sleep.
6....     I told U many times that your body has been designed by the God to take 6 Liters of oxygen per minute.
7... If you are not pregnant it will be sufficient to you..... If you are pregnant you have to share oxygen for your child's brain and body development.
8... Due to this you should minimize your body needs of oxygen.
Brought to U..... http://successgain.info
C

Popular posts from this blog 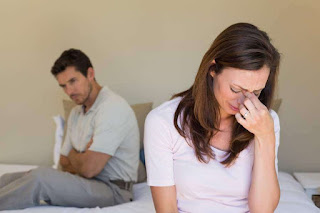 Magnesium and miscarriage Brought to U.... http://successgain.us     and    http://successgain.info   My memories Magnesium and miscarriage Posted in 2015 Magnesium and Miscarriage Low magnesium associated with miscarriage Compared with controls, a significant decrease in magnesium, with increase of the calcium/magnesium ratio, was found in miscarriage. Low magnesium, phosphorus found in threatened miscarriage The study showed symptoms of threatened miscarriage  are related to decreased concentrations of inorganic phosphorus, magnesium, total protein and albumin and reduced activity of total alkaline phosphatase activity  (alkaline phosphatases are most effective in an alkaline environment ). Women who did not undergo miscarriage showed significantly higher inorganic phosphorus concentration compared to those who lost pregnancy, what might be of prognostic value.  100% of previously infertile women gave birth after normalizing magnesium levels After a further tw
Read more

Vitamin A deficiency in Pregnancy...2 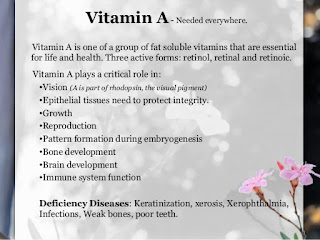 Vitamin A deficiency in Pregnancy...2   Brought to U.... http://successgain.us     and    http://successgain.info 5...  Why Vitamin A is important during Pregnancy? Vitamin A deficiency (VAD) during pregnancy represents a major public health problem in developing countries. Anemia is a common consequence of VAD. We aimed to measure serum retinol concentrations of a sample of poor Egyptian mothers and correlate it with their Hb% and cord Hb%.  Methods . This cross-sectional study included 200 healthy mothers and their healthy full term newborns. Maternal and cord blood samples were collected for CBC and measurement of serum retinol concentrations.  Results . Forty-seven mothers (23.5%) had VAD and 50% were anemic. Mothers with VAD had a significantly lower mean Hb% and a significantly higher frequency of anemia (95.7%) compared to mothers without VAD (35.9%). The relative risk for anemia among mothers with VAD was 2.7 (CI = 2.12–3.3). Newborns of mothers with VAD had a signif
Read more

How I know if I am dehydrated? 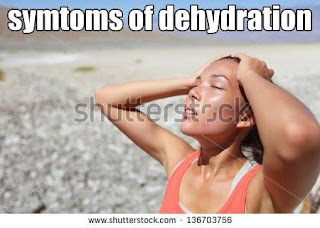